Come back Miranda 1/a 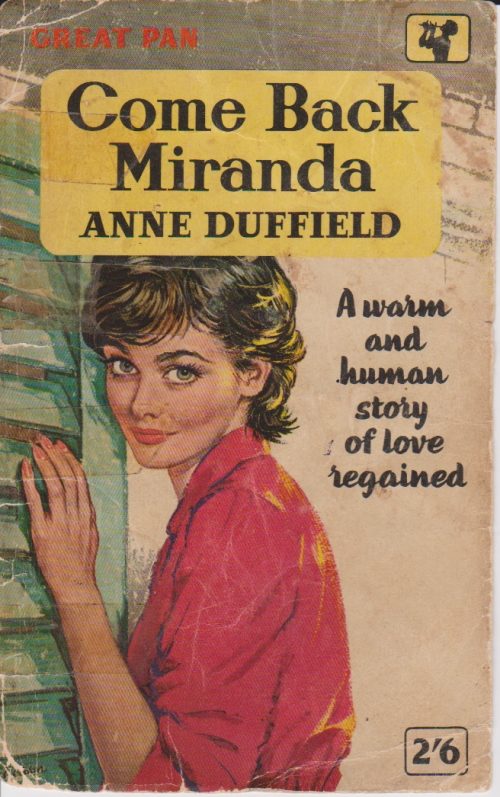 A driving wind with squalls of rain lashed the docks; the boat train passengers hastened up the .ship’s gangway into the warm interior of the main deck where the usual chaos of embarkation was in full spate. People milling to and fro, crowding about the purser’s desk, inquiring for mail, sending telegrams; stewards carrying baggage, answering questions, directing flustered ladies; a group of stewardesses in crisp cotton frocks alert in the background, a reassuring sight for those among the women passengers who were poor sailors. The weather threatened ominously, the Bay loomed ahead, but the calm-faced stewardesses would be on hand to help, comfort and see one through.

Mr. Willison, an elderly Englishman resident in Portugal and returning to Lisbon after a business conference in London, stood in an angle by the companionway and surveyed the scene with amiable eyes. The ship was a liner which in former days had not touched at Lisbon but was now combining its long routine run with shorter trips, allowing people to book for various ports hitherto bypassed and, for those who desired it, guaranteeing a passage home.

‘A most accommodating arrangements from every point of view,’ thought Mr. Willison complacently.

His attention was presently caught by the voice of one of the clerks at the desk.

“Clayton? Sir Frederick Clayton?” the clerk handed a couple of letters to the man who had inquired for them. Mr. Willison stepped forward and touched the traveler’s arm.

“Well, Freddy, where are you bound for?” The other swung round.

“Hallo, sir! Been over on a spot of leave? Why didn’t you give me a ring?”

“I merely flew over for a directors’ meeting and am indulging in a comfortable journey back. Detest planes. I take it you are on holiday. Going far?”

“Not at all. Like you, I prefer the sea when there’s no great rush. I am bound for your home town. And on a job.”

Mr. Willison, an old family friend, looked astonished. “A job? In Lisbon? My dear Freddy what is all this?”

“I have been commissioned to write a series of articles on Portugal for a new publication that is to be launched in a few months’ time. Travel magazine sort of thing.” “Indeed? I knew you dabbled occasionally in writing but I had no idea that your talent had been recognized to such an extent”

Sir Frederick grinned. He was a man of thirty or so, with a face Mr. Willison’s wife had once described as ‘nice-ugly’. It was at all events, a decidedly attractive face, healthily tanned, the infectious grin revealing strong, regular teeth, the dark eyes laughing and a little quizzical. For the rest, he was tall, with good shoulders and a very easy bearing.

“The editor happens to be a friend of mine,” he explained. “A bit of a wangle but I think my talent is adequate. An easy assignment, nothing political, just local color and general chitchat. The point is, that it’s a chance to get abroad for a decent period instead of the inside of a week on the idiot travel allowance. I’m frightfully lucky to have pulled it off.”

“Quite,” Mr. Willison agreed, dryly. “And meantime, the farm?”

“The farm is in better hands than mine. Waters, my agent, is an excellent fellow.”

“Thank you,” a harassed voice pleaded at this juncture.

“Thank you”. A second boat train had arrived and a laden steward was endeavoring to pass.

Mr. Willison shook his head as the tall figure elbowed a way through the crowd and disappeared. Freddy was incorrigible. All this rushing about, this living solely for enjoyment, .. it was time and more than time that he pulled himself together, found a wife, settled down and looked after his own place instead of leaving it to the agent.

He had been a promising boy, doing well at school, his chief gift an exceptional aptitude for languages. His war record, too, was good; Freddy never talked about it but Mr. Willison knew that, in due course, he had been selected for very special duties and acquitted himself with distinction. He had remained in the Army until 1948, attached as Liaison Officer to Headquarters in Germany. Shortly after his dis­charge, owing to the tragic deaths of his father and elder brother who were drowned when their racing yacht over­turned, he succeeded to a baronetcy and a considerable fortune.

Like so many other ex-Army officers he invested in a farm, stocked it well and set about restoring the fine old Tudor farmhouse. And there, in Mr. Willison’s opinion, he should have remained; learning the way of the earth and its seasons, superintending and sharing the labors of his men, marrying some nice girl and starting a young family; living, in a word, the useful, wholesome life of a conscientious landowner.

This, Freddy had entirely failed to do. He kept on his London flat and continued his lively bachelor existence; he had a host of friends, drove a supercharged car, was always popping over to the Continent for weekends—no harm in any of it but life should not be one long pleasure chase. Well, it was his own business and he was a good lad in many ways. Despite his disapproval, Mr. Willison was very fond of Freddy.

He went back to his corner by the companionway to watch the new lot of passengers embark and was suddenly conscious of the feeling that he, too, was being watched.

Una risposta a “Come back Miranda 1/a”